When all is said and done, one key factor that will be written about is the remarkable collaborative nature of the  “passage” of the CSKT Compact involving the political class at the state, local, and national levels of government and their open exercise of raw power.

These pages have for the most part identified the bulk of those actions and actors, but the great thing about the research conducted here is that there is actually quite a lot more information regarding the origin of the Compact and its key players yet to be revealed.

One group that has not yet been discussed is the staff of Montana’s legislative services division–the lawyers who advise the legislature on matters of the law and constitutionality of bills.  They are the ones that are supposed to flag various bills for their potential conflict with the Constitution and other Montana State Code; to advise and staff interim committees on the law related to their study areas, and to draft bills for legislators.  The Chief of the legislative services division (LSD) is often called upon to advise on specific rules issues in the House. 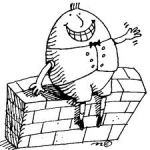 Instead of providing accurate advice to legislators that many constitutional, legal, and liability issues arise in this compact, the LSD as a whole used  the agenda of CSKT compact passage as an excuse  to overlook these concerns before, during, and after the alleged ratification in the senate and house.  The immunity issue and vote requirement regarding the CSKT Compact, the constitutionality of the Compact as part of the WPIC studies, and allowing a simple majority to rule the House where a Super majority was required to change rules seems awfully friendly to the Compact’s passage.  They have tried since 2013 to keep Humpty Dumpty on the wall.

These staff are perfectly placed to tell legislators who either don’t know the signs of or will not do their own due diligence on what to think.  Such legislators are vulnerable to bill drafting techniques which hijack bills instead of set forth their specific intent when such bills are modified to propose to “generally revise water laws” that would include and enable lots of unfriendly amendments to the original bill.

So, as we move to remove, at a minimum, the eleven so-called “republicans” who overruled the Constitution, lets also be prepared to keep an eye on  this background challenge to true conservative lawmakers that are recruited and elected.  We may be able to  assist in making sure the conservative legislators are getting sound legal advice and looking out for now-known traps of these “insider experts” in, of course, everything.

4 thoughts on “…the other participants”

NOTE: The issues discussed throughout the pages of this blog arise from problems created or advanced by the CSKT tribal council elite, not individual tribal members.

They also stem from the willingness of the state of Montana to cede its resources and constitutionally mandated duties to an "out of control" tribal government corporation under the guise of a "tribal water settlement."

This blog was established because our local traditional media stifle public discourse and debate on these very serious issues. They choose to ignore our precarious position by failing to seriously look into Federal Indian Policy run amok, refusing to print opinions and letters that differ from their own personal views, or worse yet, "censoring and revising" letters ahead of their publication.

Check out the Montana Land and Water Alliance, established to deal with threats to property and water rights represented in the Flathead Water Compact.

There are no meetings scheduled at this time

As of August 2018 Montana has not provided a quantification of the tribes water right. This is because Montana doesn't want citizens or legislators to know how much water was ceded. They told us to look at their 1,000+ pages of abstracts, so we did: