Last year, in August 2018, a team of legislators, citizens from the Montana Land and Water Alliance, the Jocko Irrigation District, and Concerned Citizens of Western Montana met privately with Senator Steve Daines to discuss the People’s Compact with him as a viable solution to, resolve, in his words “the most divisive piece of legislation to ever come out of the State of Montana”.  The Senator gave us “assignments” to complete that would provide him enough information to push back against an unacceptable CSKT Compact.

A little over a year later, in September 2019, we developed that material and requested a meeting with the Senator to present it. But the Senator refused to meet with the People who drafted the People’s Compact and with those who will be most impacted by it, preferring to meet instead with legislators. Constituents apparently don’t get to meet with their Senator.

In a remarkable turn of events after his professed promise to “never submit the CSKT Compact to Congress as long as I am Senator”, the Senator instead announced his intention to submit a “CSKT Compact” to the Senate this year. While no one really knows what is in the new proposed “Daines Compact”, and the people have been given few details, what we do know is that the Tribes have given up nothing:

The Senator and his staff reported to legislators that they “used the People’s Compact” to come up with the “Daines Compact”.  Nothing could be further from the truth—they are using this as a ploy to placate “we the people“.

The Senator has also unfortunately bought into and is promoting the IRRATIONAL claim that if the Tribes go through the Montana stream adjudication, that the water use of 2/3 of the state will be curtailed until their rights are resolved. Think about this. Montana’s General Stream adjudication has been going on since 1979.  Has anyone had to curtail their water use while the adjudication is on-going? Has this ever happened in any other state? The answer is NO.  It is the Tribes who are afraid of the General Stream Adjudication because they know these water rights will be thrown out of court.

The video below, prepared for and shown to Senator Daines at one of the legislators meetings this weekend, clearly demonstrates that the Tribes have no off reservation water rights.  That the Senator is promoting this fear tactic, instead of demanding the Tribes eliminate all their off-reservation claims, is itself irrational.

In addition to the video presentation, citizens prepared a notebook of materials that Senator Daines could use to really find a solution to the CSKT Compact.  Called the “Flathead Water Solutions Decision Makers Handbook”, the handbook was hand-delivered to the Senator and his staff at one of the meetings.  The documented evidence collected over the past eight years demonstrates that the CSKT Compact cannot be “tweaked”.  An excerpt from this handbook is provided in the table below, the Table of Contents is linked here.  Update: The entire handbook may be found at the People’s Compact blog. 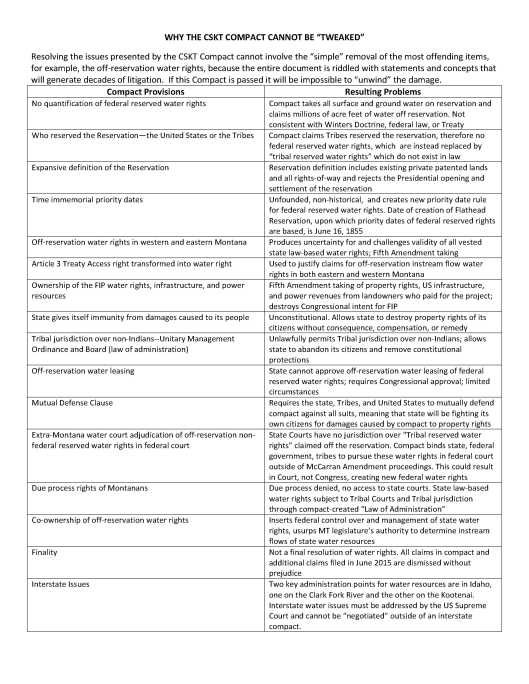 Despite the Senator’s refusal to meet with his constituents, the material in the video and Handbook ensures that the Senator cannot claim he didn’t know about the problems with the CSKT Compact, as he crafts his own “version”, now known forever as the “Daines Compact”.

NOTE: The issues discussed throughout the pages of this blog arise from problems created or advanced by the CSKT tribal council elite, not individual tribal members.

They also stem from the willingness of the state of Montana to cede its resources and constitutionally mandated duties to an "out of control" tribal government corporation under the guise of a "tribal water settlement."

This blog was established because our local traditional media stifle public discourse and debate on these very serious issues. They choose to ignore our precarious position by failing to seriously look into Federal Indian Policy run amok, refusing to print opinions and letters that differ from their own personal views, or worse yet, "censoring and revising" letters ahead of their publication.

Check out the Montana Land and Water Alliance, established to deal with threats to property and water rights represented in the Flathead Water Compact.

There are no meetings scheduled at this time

As of August 2018 Montana has not provided a quantification of the tribes water right. This is because Montana doesn't want citizens or legislators to know how much water was ceded. They told us to look at their 1,000+ pages of abstracts, so we did: