Information learned from a comment to our previous post indicates that some politicos have characterized Senator Tester’s action in introducing the CSKT Compact as “showboating”.  Interestingly, Tester chose to showboat a Compact that is fatally flawed and still in legal limbo.  There is nothing to introduce to the Senate. And since the very act of ignoring the law, ignoring letters that have been written to him from thousands of Montanans including state legislators, and the fact that the legislature’s compact vote may have been unconstitutional and is in court, we wonder what part of “failed, illegal, hung up in court, constitutionally compromised compact” Mr. Tester doesn’t understand? 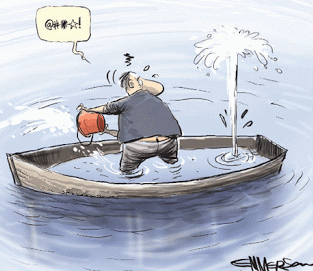 But wait, there is more.

We believe that the action by Tester was planned, and was to have been the “culmination” of a series of events that now seem completely connected:

All of these failed actions were supposed to have been successfully completed in time for the Memorial Day showboating of Tester’s “introduction of the CSKT Compact to the senate”, incidentally the wrong place to introduce an Indian water settlement which has to go through the House first.  But hey, Tester can copy Chas Vincent’s approach to by-passing the House, right?  Or maybe “I’ve read all the jurisprudence Chas” advised him to try it this way?

So he launched the sinking ship on Friday anyway, without these “pieces”  or “planned results” of the propaganda and agitation  campaign being in place.  Notably, Tester set off from shore at the start of the Memorial Day weekend.  You know, the weekend we are supposed to especially remember and honor the sacrifices of those who fought, served, and died to protect our liberty. People have died to protect even the job of people like Tester who are supposed to do America’s business.

In one fell swoop, Tester’s introduction of the flawed, non-existent CSKT Compact  dishonors the sacrifice of so many who fought and died by completely ignoring the rule of law, the legislative process, and representative government.

This is typical behavior of politicians who put their own interests above American interests; who serve single constituencies and help themselves.

But, that boat of deceit won’t float anymore!  We Americans have caught on to the scam, Montanans know that the CSKT Compact is fatally flawed, and that Senator Jon Tester’s actions are an empty political gesture that serves no one.

With no facts to prove justifiable support for the CSKT Compact, or to prove it helps anyone else but the United States, the CSKT Compact propagandists have settled for promoting a myth that it is “good for Montana” and “good for farmers”.  But consider these words by JFK in 1962:

The great enemy of the truth is very often not the lie — deliberate, contrived and dishonest — but the myth — persistent, persuasive, and unrealistic. Too often we hold fast to the clichés of our forebears. We subject all facts to a prefabricated set of interpretations. We enjoy the comfort of opinion without the discomfort of thought.

The entire CSKT Compact is based on opinion, not fact.  Starting from the first paragraph.

There are no public meetings scheduled at this time.

Click on the INFORMATION link below the photo at the top of the page and select Commissioner's Schedule.

Montana has never provided a quantification of the tribes water right. This is because Montana doesn't want citizens or legislators to know how much water was ceded. They told us to look at their 1,000+ pages of abstracts, so we did: